In February 2022, hours after Russia's invasion of Ukraine, World Central Kitchen (WCK), the not-for-profit, non-governmental organization founded by chef José Andrés, was on the ground serving hot meals. It set up eight field kitchens along the border with Poland, expanding their reach in the weeks that followed to distribute fresh food and dry goods across Poland, Ukraine, Hungary, Moldova, Romania, Slovakia, and Spain. At the time of this writing, WCK has provided more than 40 million meals in Ukraine and the surrounding region, averaging about 350,000 per day.

Both in this war and nearly every disaster of the past decade, from hurricanes and forest fires to the pandemic, WCK has mobilized the world. It has become known as the ultimate first responder, tackling overwhelming issues by helping people in need answer one simple question: Where can I find my next meal?

Since its founding in 2010 after the earthquake in Haiti, WCK has revolutionized relief work, making crisis response faster, smarter, and kinder. The speed of its response is due in part to its model for providing relief, which relies on chef volunteers in the impacted countries. In Ukraine, for example, WCK reached out to Ukrainian chefs who'd chosen to stay in their country, in cities under Russian occupation, to cook for their communities through the crisis. "In this war," Andrés says, "I can tell you that these chefs, they are fighting a war of goodness through meals."

They are fighting a war of goodness through food.

One such chef is Viktor Titov, co-owner of U Restaurant in Odesa and founder of the Ukrainian South Chef Association. Titov and his team started by preparing 200 meals each day for Ukrainians in need. That number quickly grew to 3,000, and when Titov connected with WCK in mid-March, he was able to increase to 4,000 meals per day. "I am a chef. I want to prepare food," Titov said. "Only together we can win in this war." Titov has also been instrumental in connecting WCK with several other chefs and restaurants throughout Ukraine, using social media to help get the word out. The combination of community cooks and restaurateurs who have remained on the front lines — who showed up first and will stay long after the rest of the world goes home — with WCK's support and global network, has helped make sure that, in times of acute crisis, people are fed.

Over the past 12 years, WCK has served more than 70 million meals, but their impact doesn't stop at food: WCK has created training programs that teach foundational tools like food safety and culinary education, and they recently pledged $1 billion over the next decade to establish a Climate Disaster Fund.

When it comes to how individuals can help in the midst of a crisis, Andrés urges people to think carefully about how they use their time and resources. "I always tell people that, when it is safe to do so, to come to a country like Ukraine and fill up the restaurants and fill up the hotels, and in the process find time to do some volunteer work," Andrés said. "These are the little ways that everybody can help bring wealth to places that need it the most." 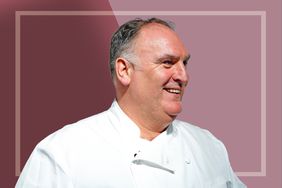