The massive success of 11 Westside seems so unlikely to Ochoa, a chef who started his professional cooking career with a parking-lot taco stand in downtown L.A.

It was maybe the third night of service at 11 Westside, the hot new Mexican restaurant in Hong Kong, when chef Esdras Ochoa realized he had a hit on his hands. Ochoa, who opened Salazar in L.A. last year, is accustomed to seeing customers endure long waits for his next-level carne asada tacos with handmade tortillas. But what happened that night in Hong Kong was unlike anything he had encountered.

Salazar is a restaurant that's almost entirely outdoors. On the handful of days it rains in L.A., the restaurant might just take the night off.

"In L.A., there's a couple drops of rain, and there are traffic jams and people start panicking," Ochoa says. "I give credit to people in Hong Kong. They'll wait in the rain for anything. Rain is just normal; rain is whatever."

But it was still a shock for Ochoa to see customers waiting two hours on a rainy day outside his new Hong Kong restaurant.

"We weren't expecting that [giant] rush," he says. "It was intense."

You could say the same thing about the year Ochoa has had, not to mention the year ahead of him. In February, right in the middle of local and national media declaring that Salazar is one of the best new restaurants in L.A. (and the entire country), Ochoa visited Hong Kong for the first time. His future business partners offered him a chance to open a new restaurant.

By early May, he was working in Hong Kong. The 11 Westside space in Kennedy Town was "an eggshell" when he arrived. The restaurant opened in August. Ochoa and his partners plan to open a speakeasy-style venue known as The Wilshire, located at the same address, in January.

It all seems so unlikely to Ochoa, a chef who started his professional cooking career with a parking-lot taco stand in downtown L.A. He says he still can't believe how far he's come after those days of making tacos with a charcoal grill from Costco.

"It's way more than I bargained for," says Ochoa, who never went to culinary school and who learned some of his technique from YouTube videos. And now he's serving what is, at heart, rustic Mexican food in Hong Kong, where many international chefs chase Michelin stars. L.A., meanwhile, has no Michelin Guide.

"At the beginning, we were kind of thought to be a high-end Mexican restaurant, which is not what we're going for," Ochoa says. "That's not our style, man. When you walk into the space, you see chandeliers and beautiful decor. But once you get the service and the food, you realize it's like Salazar, but with a bougie setting in Hong Kong."

Somehow, all the unlikely combinations make sense. Ochoa has long felt like he's part-Asian in a lot of ways. He was born in Mexico but went to school in L.A.'s Koreatown. His wife, Sarah, is Filipina. Paul Yoo, his business partner at L.A.'s Mexicali Taco (the restaurant Ochoa opened in 2012 after the health department shut down his stand), is Korean. One of Ochoa's partners at 11 Westside is barman Daniel Eun, who grew up in L.A.'s Koreatown and went on to work at some of the country's most celebrated cocktail bars like PDT, The Varnish and The Normandie Club.

And it's been fun for Ochoa to blend his Mexican influences with Asian flavors in Hong Kong. He's been going to the local wet market, where he's seen frogs bouncing and shrimp jumping out of their tanks and meat being butchered next to produce stands. He's marveled at how the energy is so different than L.A. farmers' markets.

He's been buying giant prawns at the wet market to make camarones a la diabla, a dish with a spicy adobo-chipotle sauce that's amped up by ghost pepper. For a garnish, he deep-fries gai lan, also known as Chinese kale.

Ochoa's serving grilled snapper with a Mexican salsa, but also with a garnish of pickled Chinese peppers and herbs.

"I'm staying true to my food," he says. "But as a chef, it's exciting to see new ingredients."

Ochoa's also been inspired by his local staff and how they've embraced his food. Manager Arlene Wong "is the glue," the woman who holds things down no matter how busy the restaurant gets. Sous chef Adam Kong, who's been working in respected restaurants for a decade even though he's just 25, brought in a lot of the kitchen crew. Kong doesn't speak much English. Ochoa's been learning Chinese, but he's very far from fluency.

"Half of our dialogues are sign language and making jokes and having a translator here and there," Ochoa says. "I don't know how, but magically everything just happens in that kitchen, man. The staff is so eager to learn a new cuisine."

Some of his cooks had never even encountered salsa before, so Ochoa knew he had a blank slate. He taught them how to make tortillas, both with local flour and Mexican corn, while adjusting his recipes to account for Hong Kong's humidity. He worked through the expense and other challenges of having to order jalapeños and serranos weeks in advance. He introduced his staff to al pastor and came up with specials like a pork-belly taco with salsa verde and an Ensenada-style shrimp taco that's been a big hit. He's still cooking carne asada, "just like I've been doing forever," but he's using prime short ribs for the first time.

"There's room in Hong Kong to do nicer things," he says. "We're charging $7 for a carne asada taco."

Ochoa says his "ultimate goal" is to bring some of his Hong Kong kitchen talent to L.A.. He would love to do a pop-up or open restaurants with them. He wants to provide a platform for them to showcase their food and their substantial cooking skills in L.A.

"That would fulfill me very, very much, to have an opportunity to change these people's lives through food," Ochoa says.

In the meantime, he's got a lot to do. He's about to be back in L.A. for a couple of months, checking in on Salazar and Mexicali Taco while also working on a high-profile project he can't yet disclose. At this moment, he's in Mexico with his parents, who helped him start his parking-lot stand in 2009. He's visiting Mexico City, Guadalajara, Oaxaca and San Miguel de Allende to "get re-inspired" by the food and the culture before he opens The Wilshire.

The Wilshire will be a drinking den with spirits from all over the world covering the walls. Point at a bottle and Eun's team will make you a cocktail. Every hour or so, Ochoa will send out free food, whatever he and his staff feel like. Maybe some uni tostadas or some barbacoa ramen.

Ochoa's got a Japanese pastry chef, Karyu Kawamura, with a background in sushi and ramen. He's got a Mexican chef de cuisine, Luis Torres, who had recently been living in Thailand with his Thai wife. He's got young Chinese cooks that he adores.

"There's no rules in this space, and we've got this killer team," Ochoa says. "Why not incorporate it all? Let's make it all in one room."

I ask Ochoa if he's tired, given that he's been working so hard on two different continents and that he was still jet-lagged during our recent meeting in L.A.. He had come back for a few days before his Mexico trip.

"Honestly, man, it's weird," he says. "I don't drink, I don't smoke, I'm pretty clean when it comes to that. But for some [unknown] reason, I get an [intense] natural high. What feeds this natural high is just being on fire, man, and seeing people digging the food and being supportive and loving what I'm doing. That feeds me, that gives me that rush, that energy boost."

So how do you celebrate after becoming the taco king of both L.A. and Hong Kong?

On Tuesday, Ochoa woke up in L.A., sleep-deprived but full of energy. His wife decided that their children should ditch school that day. The Ochoas went to Disneyland. 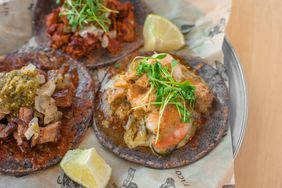 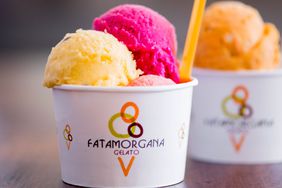