A sneak peek at one of San Francisco's most highly anticipated restaurant openings this fall, Eight Tables by George Chen.

George Chen could have been a scientist, a lawyer, a globe-trotting businessman. Instead, at the tender age of 15, he set his sights on the restaurant industry.

"People were like, 'This guy is trouble, but he's a really good waiter,'" says Chen. "I was chased out of a restaurant once by a chef. He loved to gamble, and the night before, he lost, and the next day the food wasn't right. I told him, 'I'm not serving this. This is terrible.' He came after me with a cleaver."

This is George Chen. He laughs loudly and mischievously as he recounts his high school years waiting tables at L.A.'s most prominent Chinese restaurants. (The L.A. Times profiled him back in the late 70's, detailing his talent for describing Chinese food to customers.) He's opened around 15 restaurants in San Francisco's Bay Area, including the James Beard Award-nominated Betelnut, and a handful in Shanghai in recent years. Now in San Francisco's Chinatown, he's back to stirring up trouble.

"Let's go, guys. Let's go," says Chen, as he rounds up his tweezer-wielding troops waiting in his pristine kitchen.

Just a floor above bustling marketplace and restaurant China Live, Chen's Chinese version of the massive Eataly markets, he's preparing to open his most ambitious project to date next month: Eight Tables by George Chen, his 10-course tasting menu ode to shi fan tsai, or private chateau cuisine of the Chinese elite past and present.

"In the old days, back in the Qing dynasty, they had lots of merchants and government officials who all had private chefs, and they would invite people into their homes for these grand meals. In the last 10 years or so, it's become quite popular again in China," says Chen. "So when you talk to people in the know there, and you tell them you had shi fan tsai, they know you had a very high-end, coursed-out meal."

Chef de cuisine Robin Lin, who came from Taiwan to get Eight Tables off the ground under Chen's careful watch, slides next to Chen, quietly plating the first course. It's a stunning collection of nine small bites designed to highlight the nine essential flavors of the Chinese canon. There's beef tendon simmered with green and red Sichuan peppercorns for ma, or numbing/tingly, a swirl of yuba, spinach and white miso to represent xiang, or fragrant, and so on. This is the first real dinner the team is serving, and everyone wanders over to watch Lin and Chen assemble what would be a showstopper at most restaurants. However, Eight Tables isn't most restaurants.

"Looking at the World's 50 Best list and the Michelin guides, there are very few Chinese restaurants. The image of Chinese food in America has been bastardized; people think it's low end and low labor," says Chen. "But not everything in a Chinese restaurant comes out of a wok. Chinese food is much more complex than that, and shi fan tsai is the highest form of Chinese cuisine."

Once you make your way through a nondescript alley around the corner from China Live, up the elevator and into the foyer of Eight Tables, you're greeted by Chen's father, a diplomat, and his grandfather, a general under the Kuomintang—the National People's Party—("It's a little embarrassing to have your face in the foyer," says Chen.) But these family portraits are what makes a living room, which is the effect lauded design firm AvroKO was going for. Sign in at the guest book by the door, take a cocktail from the home bar-like set-up manned by beverage director Anthony Keels and enter the wood-paneled, gold-hued room to sit at one of the eight coveted tables.

Chen has no formal training as a chef, but his attention to detail as a young waiter and his almost 45 years living and breathing the restaurant industry (as well as a talented staff culled from other top San Francisco spots like Benu and Saison) fill in any blanks. He's retired his front-of-house duties to Andrew Fuentes, the general manager who is as equally obsessive as Chen. You'll see with the check holder.

Their first menu reimagines the classics of Chinese food and is priced at $225 a head right now. (Chen isn't shy about saying he'll continue to evolve the menu as they settle down and that the price reflects the value of the ingredients they're using.) Following the nine essential flavors, there are fat dumplings crowned with caviar and a barbecue dish ingeniously turning Ibérico pork into chashu and spreading more caviar on crisp Peking duck skins. A beautiful consommé comes with battered prawns wrapped with wisps of nori and glass noodles, and the classic steamed whole fish with garlic and ginger is here served as cod, wrapped in banana leaf and topped with pickled white melon.

Wine director Tony Kim and Keels bob in and out through the meal, exuberantly offering drinks to pair ($125 per person), like a surprising Lambrusco with the barbecue course and a deliciously toasty cocktail made of vodka infused with wok-kissed rice for the velvet chicken course that follows the cod.

Red braised pork with a jammy tea egg reminds you of one of the formative experiences in Chen's career—his college years spent waiting tables at The Mandarin, under Cecilia Chiang, the iconic restaurateur who introduced America to northern Chinese food. Noodles always come at the end of a Chinese banquet meal, here they're translated as braised beef noodles with a foie gras-filled potsticker.

Back in the kitchen, a metal pot of quivering bubbles sits at pastry chef Luis Villavelazquez's station. His chrysanthemum granita and the Chinese seagrass, passionfruit and mesquite-infused bubbles he's sculpting for dessert mark the end of the meal that Chen wants every diner to remember.

"You ask people who go to a lot of fine-dining restaurants, and they say it's good, but they can't even describe it," says Chen. "I want people to tell their friends about the nine essential flavors and the barbecue. I want them to have an overall guttural experience. "

The check holder is an old book of poetry Fuentes procured and scattered with black and white photos of Chinatown he fastened into place with paper clips. It's a symbol of what Chen is trying to accomplish: taking the relics of Chinese cuisine, inserting his own dreams and ideas and transforming it all into something new and novel.

But the troublemaker that he is, Chen isn't keeping things the same and safe. He recites his pep talk for his team before dinner service begins.

"If you stand still, you're falling behind. There is no complacency. There is no status quo," he says. "We're here to get a little better everyday, which is easy to remember because we have big ambitions and you can't do it all at once."

So begins the soft-opening of Eight Tables and, so far, it's meeting all the hype. 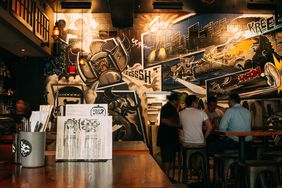 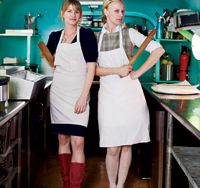