At Musang in Seattle, this chef’s elegant, seasonally driven, locavore take on Filipino cooking pushes the boundaries of tradition.

To chef Melissa Miranda, the location of her restaurant, Musang, feels like an act of fate. The periwinkle blue house at 2524 Beacon Avenue South once served as a community center and temporary housing center for Asian immigrants, says Miranda. "A lot of Filipino elders, many of whom are customers, have actually lived in this house." It's located in Beacon Hill, one of the few Filipino enclaves in Seattle and the neighborhood where her father settled when he first arrived in the city from the Philippines.

"I grew up coming up there with him all the time," recalls Miranda.

"There were two different Filipino restaurants and a lot of Filipino businesses. And when I returned as an adult, it had completely changed; everywhere had shut down. It broke my heart."

Miranda was determined to do something about this, even though opening a Filipino restaurant wasn't always the plan for the 37-year-old chef. She grew up cooking crispy lumpia and tender adobo with her dad and eating at French and Italian spots with her mom, but she didn't start working in restaurants until college (she majored in sociology at the University of Washington in Seattle) to help pay the bills. She quickly gained an affinity for the hospitality industry, pulling shifts in various front-of-house positions. "It was this window into a world that I never thought existed or could exist. You're thrown into this intense work environment with people of different age groups, backgrounds, travel backgrounds."

After college, Miranda worked in fashion management at Nordstrom and then moved to Italy, where she taught English and fell in love with both an Italian man and Italy itself. The time she'd spent in restaurants left an impression on Miranda. She spent nearly two years at culinary school in Florence, working in a range of restaurants from mom-and-pop spots to fine-dining establishments after graduation, until heartbreak eventually prompted her return home. In many ways, Filipino cuisine and Italian cooking have a lot of overlaps, Miranda says, pointing to their deep love of noodles, their embrace of lusty braises, and their prodigious use of tomatoes. "They're both centered around the table, they're both reliant on fresh ingredients, and there's similar flavor profiles I find within them both."

At Musang, Miranda's deeply seasonal and local Filipino cooking means pushing the boundaries of what might be considered "traditional," says Miranda. The laing, which is typically made with long-cooked taro leaves and coconut milk, is often made with collard greens, Swiss chard, or kale. "It has a similar texture still, but there is this fresh flavor you don't typically get in the winter months," says Miranda. It's not unusual to find asparagus, a vegetable that's not often found in Filipino cooking, all over her spring menu. Miranda makes a (still deeply pungent) vegan bagoong, a condiment that is typically made from fermented fish or shrimp paste, with the hopes of making certain dishes more inclusive for all dietary restrictions.

There's still plenty of comfort to be found on the menu, most notably through an order of the ethereally crispy fried chicken, a riff on her father's recipe. Miranda achieves this texture by brining the chicken and frying it in a mixture of buttermilk, garlic salt, and mochiko (sweet rice flour). The wonderfully thick, slightly glossy gravy it's served with is an ode to the version found at Jollibee, the beloved Filipino fast-food chain, says Miranda with a laugh.

Musang, which means wildcat, started as a pop-up, with Miranda cooking over 150 orders of Filipino brunches while working as a sous chef at Bar del Corso. Each month, Miranda and her team, many of whom still work at Musang today, would sell out of everything, building a loyal following in the process. She turned to that same community to raise $92,000 via Kickstarter to open the brick-and-mortar location in 2019. "I didn't have investors. Generational wealth didn't exist for me, and no bank was giving me a loan on a cook's credit score."

Today, Musang has lines out the door, which Miranda calls a "chef's dream," and the dining room bustles with a diverse set of eager diners. Miranda is now turning her attention to expanding, setting her sights on a fast-casual operation specializing in bulalo, a beef soup of sorts, and a variety of pancit, or stir-fried noodles. She is determined to continue to build proudly Filipino spaces. "The biggest thing about Musang is that it is for us, by us," Miranda says. "I look at this opportunity, this restaurant, and it's so humbling and such an honor. What Musang represents and what it means for us, as a community, is just huge." 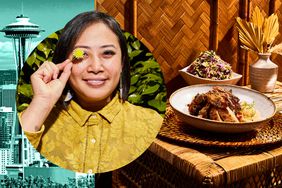