Inspired by Michigan ingredients and memories of her mother’s cooking, this Best New Chef offers lessons in the history of Korean cuisine interspersed among layers of flavor and texture.

"A lot of people have known since the age of 3 that they want to be a chef," says Ji Hye Kim, who owns Miss Kim in Ann Arbor, Michigan. "That's not my story at all. I was 30 when I started thinking about it." Kim grew up in Seoul, South Korea, on a steady stream of spectacular meals. Her mom was a talented and passionate cook, so in many ways Kim, now 43, took good food for granted. "It has always been there in my life." But Kim's mom would never let her help out in the kitchen, and at a certain point Kim stopped trying.

Kim's family emigrated to New Jersey when she was 13. She eventually moved to Ann Arbor to attend the University of Michigan, studying political science and economics. When she graduated–shortly after the September 11, 2001 terrorist attacks–she was willing to take any job that would sponsor her green card, and so ended up working in accounts receivable at a hospital. Today, Kim likes to joke that she went from "hospital to hospitality." On a whim, at age 27, she applied for a job at Zingerman's Delicatessen in the speciality foods department. "You're really only an adult when you hit 30 years old, I thought, so I had three years to mess around," Kim says. The move entailed a 90 percent pay cut, but she fell in love with the work immediately, especially "being able to talk about the food, and the connection to the land and to artisanal producers."

Invigorated, Kim started to make trays of homemade dumplings on the side, selling them to Asian restaurants in town, and started thinking about opening a restaurant of her own. Through a program at Zingerman's, she put herself through "culinary business school," putting in time in the prep kitchen at the delicatessen and working the line at Roadhouse, Zingerman's full-service restaurant. At the same time, Kim started running a food truck, laying the groundwork for what would eventually become Miss Kim, her brick-and-mortar restaurant, which opened in 2016.

Before opening Miss Kim, Kim went into "nerd mode" researching Korean cuisine using historical cookbooks. "I wasn't interested in what's being done now, or even what was done 50 years ago," she explains. "I wanted to look back a few centuries… to how my ancestors cooked." She also wanted to tap into the food she was raised on, where her mother made everything from scratch, and to emphasize local Michigan produce.

The dishes at Miss Kim offer history lessons interspersed among layers of flavor and texture. For the tteokbokki, rice cakes, on her menu, she turned to a centuries-old recipe that was served at the royal palace in Seoul. "It was considered a very luxurious dish because it takes a lot of rice to make rice cakes, which are much denser than rice—and rice is expensive." In Kim's version, batons of chewy rice cakes are crisped and tossed in a deeply savory soy sauce with silky shiitake mushrooms, a glossy poached egg, and seasonal vegetables. Pre-pandemic, she served several types of bibimbap. Most Korean restaurants in America serve a standardized version of the dish with julienned vegetables, an egg, and a dollop of gochujang. Kim mined regional differences, serving up a North Korean bibimbap, where the rice is tossed with luscious pork fat and topped with thick slices of pork belly, toasted seaweed, and a soy-based sauce, with a raw egg yolk in the middle. Kim looked to mountain communities for a recipe where rice and potato form a crust at the bottom of the bowl, which is topped with locally foraged mushrooms and served with doenjang, a fermented soybean paste that Kim bulked up with cashews for crunch. A third bibimbap, inspired by the eating habits of Korean monks (who avoid alliums, and only eat what is available within a certain distance of their temple) featured 100 percent local vegetables (with no garlic), multigrain rice, and a soy vinaigrette that remains a personal favorite. (She is eager to reintroduce these to the menu soon.)

There are few things that frustrate Kim more than the expectation that the food she cooks should be "cheap." Those same expectations are not placed on the Italian restaurant two blocks away that charges $22 for five pieces of ravioli in butter sauce, she points out: "People don't bat an eye at that." She believes that Asian food is undervalued in general, even though just as much thought, care, and labor goes into making it. Factor in the fact that Kim buys exclusively from local farmers, and pays her staff fairly, and offers benefits and safety nets like health insurance, scholarships, and massage credits, and the price of her food (entrees range from $14–$24 per dish) feels correct.

It may have taken Kim until the age of 30 to realize this was where she wanted to be, but she plans to stay. She hopes to write a cookbook one day that collects the historical Korean recipes she loves in one spot, and she has her sights set on opening another smaller, quicker operation that focuses on the plant-based temple cooking of Korean buddhists. In many ways, Kim now sees this as her life's mission. "I'm just playing a small role in the work of how food evolves and how people live." 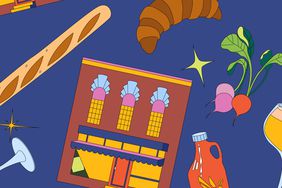