In a former pizza joint in the Bywater neighborhood, the chefs and co-owners of Saint-Germain are serving the most creative, ambitious, and accessible tasting menu in the nation.

Chefs Blake Aguillard and Trey Smith are, to put it frankly, huge nerds. The chefs and co-owners of Saint-Germain in New Orleans openly geek out over ikejime, a Japanese fish-butchering technique (it's considered more humane and helps keeps their menu prices down), or the results of a fermentation experiment (transforming scraps of venison into garum, a fish sauce–like condiment that takes three months to make). It's hard to resist getting caught up in their earnest and infectious excitement.

"Blake and I view cuisine somewhere between a sport and an art," says Smith. "We like to push things as far as we can." Something's always drying, curing, or fermenting at the restaurant. A batch of tomatoes, dropped off by a local farmer, dries in the sun on the balcony of Saint-Germain's tin roof, after which they will ferment for a month. Most meals start out with a bread course featuring cultured butter that's been aged so long it has started to taste like Parmesan. Smith rhapsodizes about a vegan cheese course he and Aguillard once made by preserving turnips for several months and then washing the root vegetables with the culture they use to make their in-house cheeses. "When you would eat these turnips, they tasted like Brie," says Smith.

The two chefs met as young line cooks, working their way up the ladder at Restaurant August under the guidance of the chef de cuisine at the time, Michael Gulotta. Aguillard and Smith bonded immediately: "We both took every level of cooking very seriously," says Smith.

They share a deep sense of purpose, but their backgrounds couldn't be more different. A Louisiana native, Aguillard knew he wanted to be a chef from a young age and remains extremely dedicated to the technical aspects of cooking. At one point, he even left the chef de cuisine position at Gulotta's restaurant MoPho, which he had helped open, to work as a line cook at Saison in San Francisco. "I just wanted to do more cooking, more learning," says Aguillard. Smith, on the other hand, spent his childhood visiting family in New Mexico, before moving to Houston to pursue an economics degree, followed by a brief stint in law school before realizing that what he really wanted to do was to cook. While Aguillard was at Saison, Smith stayed in New Orleans and continued to work with Gulotta, helping him open Maypop and getting "really involved on the business side."

When Aguillard returned to New Orleans, it became clear that between Aguillard's deep kitchen expertise and Smith's business acumen, it was time to open a restaurant. Along with Drew Delaughter, Saint-Germain's third partner who oversees front-of-house operations (who Smith met while attending the Culinary Institute of America in Hyde Park, New York, and who also worked as the general manager at MoPho), Aguillard and Smith opened Saint-Germain in 2018 in a former pizza place on a sleepy thoroughfare in the Bywater neighborhood.

Saint-Germain is one of just a handful of restaurants in New Orleans to offer a tasting menu, and it's one of the most exciting, and affordable, in the nation. (In April, my five-course tasting menu was $79, plus tax and tip.) The reservation-only 12-seat dining room is an intimate affair, where the walls are lined with the cookbooks that have influenced the chefs over the years, and dishes like a small brick of toasted housemade sourdough soaked in a rich sauce of chicken jus, sherry, and Roquefort cheese and blanketed with a dry-aged beef tartare are placed in front of you. The chefs almost never offer the same dish twice. (The rare exception? A dessert of peach ice cream topped with fried honey-butter chips.) No reservations are required for the wine bar, where seating spills into the dreamy backyard, and it's easy to pass several hours with heavy pours of natural wines and what has to be the most interesting crudité platter in the country—a recent iteration included daikon compressed in sweet soy sauce and a shower of crispy wild rice.

Aguillard and Smith want to make their culinary creations as accessible as possible. "It's always been a goal of ours for anybody to eat here," says Smith. One week a month, the team runs "Vegetarian Week," where the tasting menu is meatless but still every bit as creative and ambitious as the usual menu. "People are often served mashed potatoes with green beans or something like that," says Smith. "So when you're vegetarian and you get something that somebody has worked on for five or six months, it means a lot to them."

The two chefs also hope that Saint-Germain can serve as a blueprint for others. They take pride in the fact that they are a true small business, and they have no desire to add more seats, even if it means passing up the opportunity to make more money. "When you have a huge place, 10% of your guests get something," says Aguillard. "But when you have a smaller place, 100% of our guests get everything." Expanding the restaurant's capacity would mean compromising on how they love to cook. "Because of our hyper-focused model, you don't need 200 people to understand what you're doing," says Smith. "You only need 15 to 20 people per night who get you." 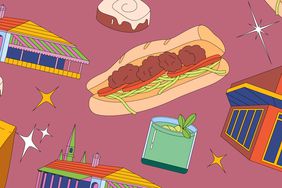