Caroline Glover is quick to credit the woman behind the name at Annette. Her great-aunt Netsie, she says, didn’t teach her how to cook, but she did teach her something else—how to have an opinion. Glover is of the opinion, for example, that Spanish patatas bravas are better with curls of octopus that are braised into submission then singed in live fire. She’s of the opinion that more people ought to be eating more beef tongue, especially when it’s dotted with pungent pickled mustard seeds and served with marrow-slathered toast. Glover’s judgment holds that there’s no such thing as too much cheese, so she serves raclette melted with earthy sunchokes in what could charitably be called a bucket. “Growing up in Texas I learned to play it safe, to not step on toes, to always be smiling,” she says. “Netsie showed me I could speak my mind, but it was working in kitchens that really got me there.”

A long stretch cooking with April Bloomfield in New York and at Denver’s acclaimed Acorn restaurant bookend Glover’s pre-Annette CV, but it’s the time in between that left the greatest mark. Burned-out from restaurant work, she started spending her weekends at Eckerton Hill Farm, about two hours outside Manhattan in Pennsylvania; eventually she decided to not come back. “I realized that I didn’t know what it took for arugula to look that way or for a tomato to taste that way,” she says. “I started working for free, living at the farm. It was the same physical labor and long hours as restaurant work, but it was more rewarding.” Glover moved around farms in the northeast and later Colorado, where she cooked at a farm and bed-and-breakfast and hosted a supper club in a dusty barn (“We spent two weeks baiting mouse traps to get the place ready,” she remembers).

Energized by her time in the field, she opened Annette in 2016, and in the years since she has proved herself a slow-burning superstar. In the tiny open kitchen, Glover showcases her mastery of a wood-fired grill, its hot spots and idiosyncrasies, but most of all its possibilities. Endive and cabbage submit to its fires; pork chops glisten on the bone. To these flame-baptized gems, she applies acid and salt with confidence. (She’s of the opinion that seasoning only makes sense when it’s aggressive.)

All of this is to say that in these polarizing times, Glover gives us the rarest of all gifts: an opinion we can all get behind. 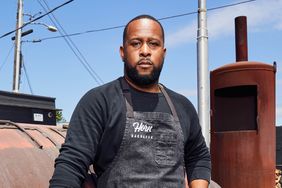