Anthony Bourdain Was More Than a Celebrity. He Was One of Our Own

Things aren't always easy in the food service industry, but he made it easier.

There are already dozens of articles, and there will be dozens more, and they’ll all start with something like, “The food world was rocked,” and I don’t need to finish that sentence because you already know.

It’s such a very unfair paradox that often those who spend their lives performing this nourishing, caring service—feeding others—often do not have the means or the ability—or stability—to do the same for themselves.

I grew up working in restaurants: from a teenage hostess at the Waffle House all the way to manning the bar at a Bobby Flay flagship in New York City—and I became used to friends and regulars dying among other horrible things: sexual harassment, wage theft, mental health issues.

You learned to accept that those are part of the equation from an appallingly young age. Though this death and other recent events and the foundation of safe spaces in which to converse leaves the industry poised to move in what is unquestionably a better direction, it feels correct to remember some of the bad old days, because you can ask any bartender, line cook, or sous: Anthony Bourdain helped us get through them.

It’s a sort of weird thing, the restaurant life. Everything outside of it becomes what’s not real, and restaurant life becomes “real life.” Your upbringing doesn’t define you, your sexuality doesn’t define you—what defines you is how quickly you can make a cocktail or if you’re a badass on the grill. I’ve known people who can separate their real-life from their restaurant-life, but they are few and far between. When you work at a restaurant, you eat that food, you participate in that culture. You live in that world.

And so every time a death happens, the world is rocked—maybe it’s not the food world writ large, like this time, but when your local restaurant is closed because of a death in the family, it pays to keep it mind that it may not have been old age, or cancer, or even your definition of family.

Restaurant coworkers are not like other coworkers—they will actually show up to help you move, pick you up when your car breaks down, and not judge your (entirely questionable) romantic decisions. I think that’s the real reason so many people become lifers.

We watched his shows and stuff, yeah. And we enjoyed his irreverence and the way he tortured Ripert and the goofy Instagram pictures of him and his lady friend. And most of all, we read that book. I’ve never worked in a restaurant where Kitchen Confidential hadn’t already made its rounds. He may have been some dude on TV, but he understood us, from the dive bars to the drug escapades to the douchey questions that we had to answer every shift—he put it down on paper, and then he said it aloud on TV. And the best part was, you got the feeling that he never became an asshole, either.

I went to see him speak in Columbus, Ohio, once, about eight years ago. It was a slow night at my restaurant, so I took a cut and went to a bar and ordered some whiskey, and then I paid more money than I could afford to go watch him not even promote a book. The theater was full.

“Who’s cooking in this city tonight, if you’re all here?” he said. I mean, I’ve been to NHL play-off games where the reaction was nothing compared to the cheers that night. It wasn’t that he was a rockstar. To us, he was our rockstar.

After enough time and grad school and internships and shitty bar jobs, I eventually applied and was offered a chance to work on the website for the popular “Parts Unknown” show. It was with real, honest-to-goodness starstruck wonder that I got to do that. As a job. Every day.

Working from an office in Brooklyn, doing that job, made my world so much bigger, and so much brighter, and I could say a lot of other stuff but it could come out as trite, and I just don’t want to.

I don’t work on that team any more, and I don’t quite know how to put this: I spent some time creating content around a show that is undeniably smart, savvy, and that stretched the boundaries of what many viewers knew or thought they knew about their world. And I appreciate his political leanings and his firm belief that food could be a force for good. And I believe, even now, that the conversation was so much bigger than just some guy, on the road, eating food. In fact, I think that some of his stuff amounts to actual public service in its truest sense. And I think the world grieves over that loss. But that's not why those of us in the restaurant or food media grieve. We grieve because one of our own is gone.

Long before I ever dreamed of working even adjacent to, let alone for Anthony Bourdain, I wrote a piece about all this, and the writing’s not so great but the sentiment is there.

“Not to get too Anthony Bourdain about it, but working in a restaurant made me feel like a badass, and there are few ways for a musical theatre geek who plays the flute and prefers books over people to feel badass. Getting into that perfect zone during dinner service? That moment when you’re working and everything sort of falls away, the sounds from the kitchen become distant, the sound of cocktails being shaken at the bar fade, you have twenty things to do at once, and you just sort of step outside of your body and watch yourself do them with perfect precision, in perfect order, with perfect grace and to top it all off, you’re witty as hell?

That moment is fucking badass.”

And I think that’s how he made a lot of us feel. 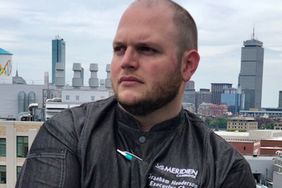