Get to know the winemaking technique that's behind your favorite fruitier, lighter wines.

If you’ve ever had a glass of light red wine that’s super fruity and juicy, with an almost bubble gum-like aroma, there’s a chance it was made using a technique called carbonic maceration.

When we talk about carbonic maceration in winemaking, it’s usually in reference to light, juicy reds like Beaujolais. The French region invented and popularized the technique in the mid- to late-20th century, which helped elevate the reputation of their Gamay-based wines.

These days, you can find carbonic macerated reds of all kinds, made from grapes including Cabernet Franc, Pinot Noir, Malbec and Zinfandel. Thanks to this unique winemaking technique, these reds are generally lighter in color, with little acidity and few tannins, marked by their highly fruity aromatics. Some might even describe them as being gulpable or quaffable.

Carbonic macerated white wines are less common — but that’s slowly changing. As warmer temperatures, wildfires, and variable harvest conditions continue to challenge winemakers across the world, some are applying this technique to white grapes, yielding a new, exciting category of aromatic wines.

What is Carbonic Maceration?

It might sound highly technical, but carbonic maceration is a relatively hands-off technique. During traditional fermentation, grape juice evolves into wine through a yeast fermentation, wherein yeast (which might be naturally present on the grapes or added by a winemaker) consumes the sugars in the juice, turning them into alcohol.


With carbonic maceration, that initial fermentation happens without any yeast. Instead, as Joe Flynn, winemaker for Plum Creek Winery in Palisade, Colorado explains, fermentation happens within the grapes themselves. “Carbonic maceration in itself is basically an intracellular fermentation,” says Flynn.“You put the whole cluster of grapes, still on the stem, into an environment that’s filled with carbon dioxide.” The lack of oxygen in the air-tight tank causes the berries to start fermenting from the inside, breaking down sugars and malic acid that convert into alcohol. Once the alcohol reaches about two percent, the berries burst, and the juice releases naturally; a traditional yeast fermentation is then used to finish making the wine.


Many bold red wines, including those from Bordeaux, Rioja, or Argentina, get their dark-red hues from the extended period of time during fermentation in which the pressed juice stays in contact with the grape skins, which contribute color and tannins (which cause a drying sensation in your mouth) to the wine. Because there isn’t much skin contact during the fermentation process with carbonic maceration, the resulting wines are usually low in tannins and big in fruitiness. Whether you’re drinking a red or white wine that has undergone carbonic maceration, expect big, juicy aromatics.

Why Winemakers Are Embracing Carbonic Maceration for White Wines


For many winemakers, especially those working in New World regions like the U.S. and Australia, applying tried-and-true winemaking techniques to different grapes or scenarios is par for the course. “Part of what we do is experiment…curiosity keeps us going down new paths,” says Tank Garage Winery owner James Harder. “We started down the carbonic maceration path with reds, and really liked the results. One of us threw out, ‘What if we do this with white?’”


In 2019, the California winery became one of the first in the state to put white grapes, specifically Petit Manseng and Vermentino, through a carbonic maceration. “When we did it, we were like ‘Why haven’t people been doing this for way longer? It’s so delicious and fun,” says winemaker Bertus Van Zyl, who plans to keep using carbonic maceration with white grapes, so long as they’re able to source the right varieties for it. Their current carbonic white release, the 2021 La Loba, is a blend of Chenin Blanc, Petit Manseng, Bianchetta Trevigiana and Orange Muscat.


But for Joe Flynn, introducing white grapes to carbonic maceration for the first time was born not out of whimsical experimentation, but need. The state’s western wine region experienced late frost in the spring of 2020, and the winery wasn’t able to source fine wine grapes for its annual Palisade Festival blend at harvest. “In order to stay 100-percent Colorado grown, we were only able to work with hybrids that year,” says Flynn, who had to make due with white hybrid grapes like La Crescent, Aromella, Itasca and Traminette. “I was dealing with crazy sorts of chemistry with these grapes; the pH was perfect but the malic acid was wild.” With carbonic maceration, he was able to make lemonade out of lemons, so to speak.


“[Carbonic maceration] pulled out such crazy nuances of citrus blossoms, orange peel, lemon curd…as [the wine] mellowed out and grew into itself, it became really prolific,” says Flynn. If he had fermented the grapes traditionally, the acid would have been “through the roof,” meaning he would have had to blend the wine or neutralize it through chemical deacidification.


In Oregon, Morgan Beck, winemaker for Johan Vineyards, is similarly taken by the unique qualities that carbonic maceration brings to white grapes. The Willamette Valley winery is known for their expressive and aromatic wines, which the winemaking technique plays a special role in. When Beck started working as a winegrowing assistant at Johan in 2015, carbonic maceration was already incorporated into the winemaking routine for the biodynamic estate’s Drueskall Pinot Gris bottling. A few years later, Beck stepped into the winemaker position; this year, she experimented with trying carbonic maceration with other white grapes, inspired by a similarly-made white blend that she tasted on a recent trip to Austria, which had “very pure fruit and an interesting aromatic profile.”


Carbonic maceration is more than just a solution for a tricky harvest, however. Winemakers are finding that applying this technique to white grapes simply makes an enjoyable wine. “What we’re realizing is that it’s really intensifying those flavors off of those skins, and it’s giving white wines a whole new depth that we’ve never really experienced before,” says Flynn.

A New Tool in the Toolbox


So, can we expect to see more of these wines?


Flynn thinks so. “If we’re trying to get white grapes at the most opportune time, when the concentration and pH is perfect, but maybe the acid is a bit wonky, carbonic maceration is going to be one of those tools in the toolbox deemed as being appropriate and required,” he says. “I see carbonic maceration becoming more of a necessity in the cellar, and I also think once a lot of other winemakers feel safe and see that there are others out there doing it, they’re going to go ahead and take a chance themselves.” 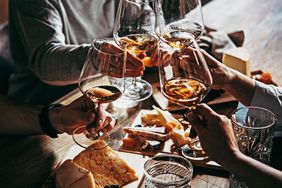