This chocolaty, caffeinated cocktail might look like an average milkshake, but it packs a deliciously boozy punch.

If you’ve ever wondered how a chocolate milkshake could possibly get better, look no further than its boozy, caffeinated cousin, the Bushwacker. Created in 1975 in the Virgin Islands by Angie Conigliaro and Tom Brokamp at the Ship’s Store & Sapphire Pub on St. Thomas, this decadent drink made its way to the United States by way of Linda Taylor Murphy, a Pensacola, Florida-based bartender who fell in love with it after a trip to the island. Murphy’s bar, the Sandshaker Lounge, quickly became known for popularizing the Bushwacker stateside, so much so that each year, fans of the drink gather in Pensacola for the annual Bushwacker Fest. Conigliaro and Brokamp are said to have named the cocktail after a lovable dog, Bushwack, who belonged to patrons of the Ship's Store & Sapphire Pub.

Although there are several twists on the creamy, chilled cocktail, our preferred version calls for aged rum, Kahlua coffee liqueur, Coco Lopez, whole milk, and créme de cacao. For this drink, we suggest using a sweeter coffee liqueur like Kahlua, but prefer Coco Lopez to other, sweeter coconut cream brands to keep the drink’s flavor from getting too saccharine or cloying. It’s not uncommon to find Bushwackers that make use of Bailey’s Irish cream or amaretto liqueurs, a scoop of vanilla ice cream, or even Cointreau, for a bit of orange flavor; the same versatility holds true when it comes to garnishes, which can include whipped cream, chocolate sprinkles, grated nutmeg, or in the case of our recipe, crumbled dark chocolate and a branded maraschino cherry. For an extra boozy kick, you can float overproof rum into the drink by slowly pouring it over an upside down spoon that is positioned over the rim of the glass. 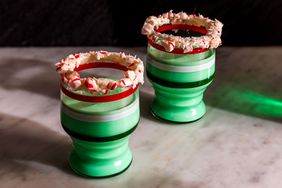