The Best Way to Keep Wine Fresh After Opening? Buy the Right Bottle

How many days will that great bottle last in the fridge? Depends on the wine you're drinking.

We've all been there. You open a wine, have a glass or two, put the cork back in the bottle, and wonder: How long is this wine still going to be good?

The answer—like everything to do with wine—is that it depends. What causes an open bottle of wine to deteriorate is exposure to oxygen, but various factors mitigate its effects. For instance, Master Sommelier Pascaline Lepeltier says, "I've found that wines exposed to oxygen during vinification last longer, both in aromas and texture; acidity is a plus; so are tannins—which also means skin-contact white wines." Being a master sommelier, she adds, somewhat dauntingly, "Also, wines with pyrazines tend to keep those notes." More on that in a second.

To test out some of Lepeltier's suggestions, I opened 30 bottles and kept them open over the course of a week. Sure enough, orange wines (where white grapes are macerated on their skins, adding tannins and an amber hue) did well; the 2019 Troupis Ekato Moschofilero from Greece crushed the competition and tasted nearly as good on day seven as it did on day one (a pity that only 1,200 bottles were made). As Lepeltier predicted, wines that were exposed to oxygen while being made—many orange wines, again—seemed almost vaccinated against oxygen exposure later on. Both Carmenère and Cabernet Franc, grapes with lots of pyrazines, which give wines green peppery and herbal notes, did well. So, too, did white wines that retained a tiny amount of carbon dioxide from fermentation—not fizz, but a faint tingle on the tongue. And young, intensely tannic reds did well. For all these, four days was fine. By seven, though, even the toughest had declined.

One thing: any open wine, red or white, will last longer in the fridge. Just reseal it with a stopper or cork. (If it's red, take it out and let it warm up a bit before you pour.) Wine preservation devices can also help. The ones shown in the photos here were the most impressive that I tested, extending the life of an open wine by at least five or six more days. But still, I do always wonder—if the wine was good in the first place, why not just drink it?

The Sangiovese-based reds of Morellino di Scansano are usually more powerful and rustic than nearby Chianti's. This one, its red cherry fruit wrapped in potent tannins, is no exception. I liked it even more the third day after I opened it.

Chilean Carmenères often lean into the herbal, green tobacco aromas of this red grape. This one, savory and peppery, with black currant fruit underneath, is a potent wine, and those herbal notes only got more distinct over a couple of days.

This melon-y Piedmontese white is made with a tiny amount of carbon dioxide from fermentation still in the wine. It tingles on the tongue ever so slightly—and survives very well over several days in a fridge.

Argentina's Zuccardi made a standout Cabernet Franc in 2018, with cured tobacco and smoky herb aromas, plus plenty of black cherry fruit. It was delicious when first opened and stayed that way for several days.

Winemaker Luca Currado's father helped save the Arneis grape from extinction back in 1967. Currado makes this lime-zesty white in a way that allows him to keep a touch of carbon dioxide in it. He says, "It's the best and most natural possible preservative."

This herbal, appley orange wine is made by Italian winemaking star Paolo Bea for the sisters of the Cistercian order in Vitorchiano, 90 minutes north of Rome.

A California Cabernet Franc in a Loire Valley style, this red focuses less on Franc's fruit flavors (though they're certainly present) than its tomato leaf and green peppercorn notes. Even after a weekend open, it remained bright and fresh.

A tiny amount of retained carbon dioxide contributes to the incredible freshness of this stony, lemony Napa white. A blend of Pinot Bianco and Greco di Tufo, it sustains its flavor incredibly well once opened.

Sicily's Cos ages this earthy, amber-hued Grecanico in clay amphorae, allowing the wine to macerate on its skins for over a month. It's long been a go-to bottle for fans of orange wine.

Like most young Barolos, this red was tight and tannic at first. Yet on the second day, it bloomed, showing deep, briary fruit and fine, gripping tannins. It stayed that way for another two days—and then I gave up and drank it.

The late Serge Hochar of Lebanon's Chateau Musar used to suggest tasting this golden-hued, peach-scented white over the course of a month to see how it developed with air. So a few days open, even a week? Nothing to worry about.

This new, more affordable device from Coravin uses neutral argon gas to preserve the wine in the bottle and also dispenses the wine through the Pivot's nozzle, eliminating the need to keep corking and uncorking the bottle.

Two gas cartridges—one oxygen, one argon—allow this ingenious device either to oxygenate a wine (much more effectively than aeration devices, I found) or preserve it under a layer of neutral gas.

The oxygen-scavenging compounds in the tops of these stoppers effectively absorb 99.9% of the oxygen from an open bottle. It may seem like a magic trick—but it works extremely well thanks to innovative research from founder Tom Lutz, who has a PhD in chemistry.

Was this page helpful?
Thanks for your feedback!
Tell us why!
Related Articles
25 of Our Favorite Under-the-Radar California Reds 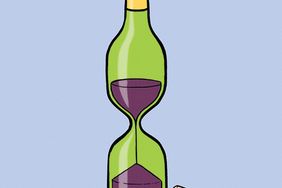