There are perhaps no players more important to the world of beer-focused restaurants right now than New York's Resto and Luksus. The Belgian-style Resto is the veteran on the block, having been around for nearly eight years and spawning the wildly popular brew-focused gastropub The Cannibal Beer & Butcher right next door. Meanwhile, Scandinavian-inspired Luksus—situated in the back of my favorite beer bar in Brooklyn, Tørst—recently earned its first Michelin star. What both establishments have in common (in addition to ties to phenomenal beer bars) are the stellar beer lists that they make available to their dining customers that can compete with the best curated wine lists out there.

And so, when I was granted the opportunity to have an intimate, improvised meal with the men responsible for financing, curating and cooking for these two incredible meccas, I nearly did a spit-take from my stein. At a loft in Manhattan, I met with the following gentlemen to find out what it's like to be on the cutting edge of fine beer and fine dining:

Francis Derby: Chef at Resto and The Cannibal

Christian Pappanicholas: Owner of Resto and The Cannibal

The street outside of the Lower East Side loft where I'm waiting vaguely resembles the set of an apocalyptic zombie flick. Yet heaven awaits inside, where there is a dais covered with delicious beef jerky, pork rinds, peanuts and sliced prosciutto.

Behind the table, Daniel and Francis are already cooking their faces off (though not literally, which would be unsanitary).

While Dancis (Dan and Francis's celebrity chef couple name) cook in the kitchen, Christian, Jeppe, Cory and I discuss our greatest culinary dislikes, following my own admission of hating corn:

Cory: Like whiskey. Scotch. I will vomit if it comes near me.

Ethan: What about you, Christian? Greatest food aversion?

Christian: (long pause) I'd have to think...

Jeppe: Mine is marzipan. I f**kin' hate marzipan.… My grandfather was the CEO of a marzipan company—he'd bring home big blocks of the shit. I always hated it.

Jeppe: And I f**kin' won't eat tomatoes. They're stupid.

Fortunately, there are no corn, tomatoes or marzipan to be found on the menu tonight. There are, however, plenty of incredible appetizers, including Welsh rarebit (mustard powder and English cheddar cheese melted on toast); Danish trout salad; and a salad of fresh arugula, turnip top, kohlrabi and green tomatoes tossed in a buttermilk dressing.

After almost two hours of eating and drinking, the conversation finally shifts toward beer. You might not believe this, but Jeppe has some pretty strong opinions.

Jeppe: The thing about beer is that there are no rules, but there are a lot of rules with wine. Right now we're drinking beer made with raspberry. Awesome beer, and it goes with a lot of food. If you put raspberry in a wine, people would be like "what the f**k are you trying to do, you asshole?"

Cory: Manipulation is much more accepted and expected in beer. The winemaking culture has drifted to a point where less manipulation is best, so you see a lot from the natural wine movement: no sulfur, no fining, no filtering. In beer, there's a lot more creativity expected.

Dan: The major part about it, too, is that wine is based on terroir. With wine, if you don't touch the grapes but there's a bad season, you're just f**ked. There's nothing you can do. But because it's not [restricted by] Mother Nature, the beermaking tree grows as quickly as people's imaginations.

Jeppe: I did an interview in which I was asked, "Are you a scientist or an artist?" And I said, "I'm none. I'm a cook." A cook can put whatever the f**k he wants into a pot — all kinds of vegetables, meats, spices, cheeses — and come up with something. [Brewmasters] can do the same now. I've made beer with licorice, beetroot and all kinds of weird shit.

9:39 p.m.—The Camaraderie in Their World

At this point we have had the following beers: Evil Twin Bikini Beer Sour, Une Fausse Blonde, Cisco's Lady Of The Woods, The Bruery's Hottenroth Berliner Weisse and the guest of honor, a Cantillon Lou Pepe Gueuze from 2008 (a rare Belgian lambic). Things are going well.

Jeppe: I work with a lot of restaurants, and I see how they are accepting beer more and more. Even fine dining restaurants like Noma (the current owner of the World's Best Restaurant title, where both Jeppe and Dan have worked). Fifteen years ago, [beer] was all shit. Right now, it's better than it's ever been. So many good brewers, it's crazy.

Ethan: As some of the leaders in this growing, high-end beer/food world, are you wary of all the new competitors?

Christian: People outside of our industry say, "Oh man, New York restaurants—the competition must be crazy." I don't think about it that way. They're my friends. Short of somebody opening up "Ray's Original The Cannibal" across the street from me, I don't feel like I'm really competing with anyone. We're in this together.

Ethan: But then again, if you're doing something really well and someone's doing a really shitty version of it, doesn't that bother you?

Jeppe: I've stopped being concerned about that. I can only do my best. If people want to copy what I do, I just have to f**king beat them.

And perhaps the best dish of the night: "cabbage-braised cabbage"—a chicken stock-based soup made with shirodashi, house-fermented sauerkraut and Benton's bacon. Truly incredible.

Save for the sound of chewing, the room is pretty quiet.

As Dancis head back into the kitchen to ready the final course, I talk to Christian about his expanding empire. In addition to Resto and the original Cannibal, he opened a second Cannibal outpost on Manhattan's West Side and has a future location planned on the very west side (Los Angeles).

Ethan: In opening Resto, how much did beer play into the plan?

Christian: We weren't actually going after the beer geeks. The idea was: "Come eat, but enjoy a really proper beer selection with your meal." As diners, we might want to drink beer with our first course and wine with our second course. I want all beverages to be equal! Jeppe, you don't only drink beer—you drink wine all the time, right?

Jeppe: I only make beer so I can afford wine.

Ethan: And now you're opening other Cannibal locations?

Christian: L.A. is going to allow us to do The Cannibal the way that it really needs to be done. At [the original 29th Street location]...it's a challenge for us to do sausages and large formats and steaks with two easy-bake ovens and a panini press. In L.A., we want everything to be cooked on wood so we can do a much bigger meat program. And the other thing is that the beer scene in L.A. is very West Coast-centric, like people have 92 IPAs on draft. You know, we're fairly bottle-centric in all of our restaurants. So we felt like there's a market there.

Cory: Sorry to interrupt, but are we feeling more beer, or wine, or—

Jeppe: Have you tried this bourbon barrel-aged fish sauce? I just tried some from a spoon—holy f**king shit. I am obsessed with fish sauce, and that is—just go taste it. Drink out of the bottle.

(He is correct. It's some damned good fish sauce.)

One bite in, Jeppe is furiously typing into his smartphone.

Now that Jeppe has his fish sauce secured and we've taken down the venison and squab, the talk turns to what the idea of fine dining means to these guys.

Ethan: Other top-tier restaurants tend to come with a bit more stuffiness or pretention. How do Resto and Luksus fit into the world of fine dining?

Francis: There's gotta be some sort of balance. I don't want to be unapproachable ever.

Dan: Luksus means "luxury," but it's tongue-in-cheek. It's questioning what fine dining is.

Jeppe: [Luksus] is very "un-luxury" in many ways, but the food is awesome.

Dan: Some [restaurateurs] spend money to put graffiti on the wall—that's their decision. It's your house. What's fine dining for me? F**k the white tablecloths—I want to spend the money on the food. Let's buy shitty wine glasses and spend more money on the food.

Dan: You want the white tablecloths.

Christian: Look, I'm so happy that the food that these guys and we make is [served] in an environment where I don't feel like I have to be fussy. But sometimes I love being fussy.

Finally, Fran busts out his secret dessert: an ice cream float made with Schöfferhofer Grapefruit Weizen-Mix. My contribution for the evening—doughnuts from the Doughnut Plant—go perfectly with Evil Twin's Biscotti Break Imperial Stout, easily my favorite beer of the night.

Nearly five hours later, we've managed to put a serious hurting on the food, beverages and ourselves. And despite whatever price we may have to pay tomorrow, the culinary and social adventure was worth every moment. I shudder at the thought of stepping into the cold winter night to rejoin the harsh reality of the outside world; but fortunately I live in New York, so I'll get to head back to Resto and Luksus to relieve much of this incredible evening again and again.

How to Make Bacon Beer-Soaked Cheese
Was this page helpful?
Thanks for your feedback!
Tell us why!
Related Articles 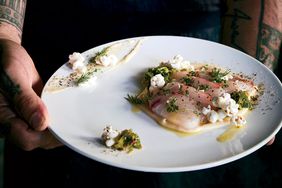 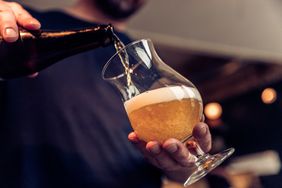