Want to make craft beer for a living? Right this way.

There is a lot to love about craft beer. As Arches Brewing brewmaster Jamey Adams puts it, craft brewing is "the constant pursuit of perfection and the occasional realization that you have achieved it." What a job description. And, Adams adds, "If you're the kind of person who believes you should learn at least one thing per day, then brewing is for you."

Working as a craft brewer isn't easy, warns Dustin Hazer, owner and brewmaster at Helio Basin Brewing Company. "The craft brewing industry is, more than anything, a lifestyle," he explains. "It is not just a job, and it is not a typical career path. It is physically demanding work with long hours and typically lower compensation." But, if you're up for the challenge, "the tradeoff for seeing past these barriers is that you are doing it because you love it and ultimately it makes you happy to be doing something you are passionate about," Hazer describes. "It is not for everyone, but if and when you find out it is your calling, you will know that it is undoubtedly worth it."

2. Volunteer at a local brewery.

One way to get a foot in the brewery world's door—quite literally—is to visit local breweries and ask if they need another hand to help with some of their more menial tasks: keg cleaning, bottling, or canning. "Usually, you will find that they are in need of help," Adams says. As a volunteer, you can interact with staff members and network within the industry. "If you want to be in the craft brewing industry, you have to understand that breweries are sometimes small families, and it's hard to bring someone new into such a small circle," explains Danny Bruckert, head brewer at Circa Brewing Co. Volunteering is just one way you can break into that circle and network to your advantage.

We know this will be a really tough step to take—that's sarcasm, readers—but Hazer says tasting as much beer as you can, in as many styles as you can, is a crucial step to expanding your brewing knowledge. "Write down sensory notes and compare them to style guidelines," which you can find in a bevy of brewing books, Hazer says. "This will help you start to understand the science behind the beverage as well as the art." Not only will this exercise teach you more about brewing, but it will give you a taste for whether you have the drive for this job. "No matter how long you've been brewing, there are constantly things you can be learning," he says, "so if you like the act of brewing but not understanding what is behind the brew, this profession probably is not for you."

As Bruckert explains, "getting in touch with the process on a basic level will give you more familiarity when you see it on a much larger platform." To start, Adams suggests joining a homebrewing club. "Often times brew clubs will brew a large batch of some style and then divide the beer into smaller individual carboys that can be pitched with different strains of yeast or dry hopped with different hops," Adams says. "This will provide much more knowledge about brewing than just a single batch treated one way." If you make a brew you're particularly proud of, take meticulous notes on your process and bring it to a professional brewer to critique it, suggests Bruckert. "Negative or positive, you'll at least be establishing a relationship," he points out, before adding, "think of each batch as a potential business card, and make sure that you label the bottles in some way with your name, phone number, and what kind of beer it is" before you hand it out.

5. Get a formal education.

A background in chemistry, microbiology, or even engineering could be your best friend if you want to become a brewer, Bruckert says. "Don't think that's your [only] ticket to ride though," he warns "I've seen many people come into the craft industry with backgrounds like that, who for some reason or another just couldn't manage to survive." If you don't have a degree in those fields, "a general knowledge of pH, acid/base titrations, temperature versus CO2 volumes, specific gravity, alcohol by volume, volume and weight conversions, concentration calculations, and yeast husbandry techniques will definitely help you get your foot in the door," says Adams. Bruckert also recommends joining a brewing program—the American Brewers Guild, Siebel Institute, and U.C. Davis—all offer them. "If those are out of your reach, then start as a keg washer," Bruckert says, a job that will help you learn the basics of brewing as you do more menial brewing work.

Scrubbing tanks may not sound like fun, but Bruckert says starting from the bottom isn't so bad. "These may not be glamorous jobs, but they are a foot in the door," Bruckert says. Soak up all the information you can and wait. "Breweries are just like any other business," he says. "People come and go, and you may find yourself next in line." 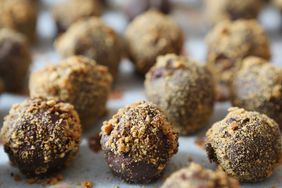