A brewery in Austin has brought this strange cold weather tradition to Texas.

The phrase “warm beer” probably conjures up memories of tailgates gone wrong because someone forgot the cooler or not-entirely-accurate rumors of how the Brits drink their brews. But though the connotations of warm beer are almost entirely pejorative, an Austin-based brewery has garnered some buzz by trying to start an odd new Texas tradition: an annual fall event where beers are purposefully and rapidly warmed with a hot fireplace poker. Cheers?

As bizarre as the process sounds, Strange Land Brewery – the people behind these “beer fire poking” events – explains that there’s a pedigree to their seemingly bizarre ways. “Beer poking is a tradition from colder climates, usually taking place in early Spring when Bock beers hit the market,” the brewery explained after last year’s inaugural event. “Who knows the true genesis of beer poking, but in crushing winter climates, gathering around a bonfire for a warm poked beer revitalizes the spirit.” Admittedly, despite a decade covering beer (and a decade more drinking it), beer fire poking is new to me, but a quick Google search reveals that, though not necessarily common, it’s not a completely novel concept.

What does make Strange Land’s event more novel, however, is that, as they admit, it’s likely a new idea for the mild winters of Texas. “Here at Strange Land, part of our heritage originates in colder climates so we are bringing what we love about where we came from to where we are now,” they later continued. “But rather than duplicate the original, we adapted the tradition to our own context. Instead of in the Spring, we host poking events in the Fall to toast the advent of cooler temperatures; instead of a bock beer, we feature malty seasonals like our Headless Gentleman, an imperial bourbon pumpkin porter.”

Of course, the big unanswered question is how does a hot poker make the beer taste? Well, turns out the change in flavor is part of the charm. “In addition to heat, the red-hot poker adds depth of flavor, caramelizing the malt and imparting a smoky character while giving the beer a creamy mouthfeel,” Strange Land states. As the site Austin360 elaborates, imagine roasting a marshmallow over an open flame, but instead, imagine putting that open flame into your beer. It’s kind of like the beer version of making s’mores.

If you’ve become intrigued by the idea of beer fire poking and happen to live in the Austin area, Strange Land Brewing will be holding one of these events this Thursday, November 30 at Glass Half Full Austin. “THIS IS A REAL THING! WE PROMISE!” the brewery states on the Facebook event page. If you don’t live in Austin, well, please just wield your own hot pokers safely. 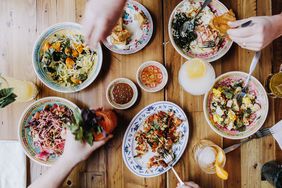