F&W Star Chef
» See All F&W Chef Superstars
Restaurants: Little Market Brasserie, Tavernita, Barcito (Chicago)
Experience: The French Laundry (Napa), Martín Berasategui (San Sebastián, Spain), El Celler de Can Roca (Girona, Spain)
When chef Ryan Poli was 17, he landed a job at the fish station in a Chicago diner. “I liked the late hours and seeing grown men and women swear,” says Poli. “I knew after the first day that I wanted to be a chef.” It wouldn’t be long before he would be cooking in more auspicious surroundings, starting in Napa with a stint at the storied French Laundry, and continuing in Spain at a number of the country’s most exciting restaurants (including the three-Michelin-starred Martín Berasategui in San Sebastián and El Celler de Can Roca in Girona).
Poli resurfaced in Chicago as chef de cuisine at Perennial, where he got his first serious accolades: Food & Wine called his black truffle gnocchi one of the best affordable dishes of 2009 and named him a People’s Best New Chef nominee in 2010. But it wasn’t until 2012, when Poli launched Tavernita and the adjacent “stand-and-eat” tapas spot Barcito, that he truly had a chance to put all of his Spanish training to good use. There, the chef infuses Iberian staples like patatas bravas and albondigas with a healthy dose of American brio.
As he prepared to open Little Market Brasserie in Chicago’s Gold Coast neighborhood, Poli sat down with Food & Wine to talk about burying eggplant in embers, spiking mayo with smoked pimentón and dousing grilled egg-and-cheese sandwiches in Sriracha chile sauce.
What recipe are you most famous for? If we ever took the pork belly bocadillo off the menu at Tavernita, people would kill me. It’s a crispy piece of pork belly with apple jam, pickled red onions and a little bit of arugula salad on a brioche bun. The flavors are acidic, sweet and salty, and there are a lot of textures going on.
What two dishes really tell us your story as a chef? There’s a dish here called escalivada, which is roasted eggplant and red peppers. We make a fire with a wood-burning grill and once it dies down, we put the eggplant and the peppers directly into the hot ash. It’s a technique they use in Catalan cooking, and it’s not anything like roasting something on the grill or cooking it in the oven. The flavor of the fire really infuses itself into the vegetables. It’s one of the things that inspired me to get into Spanish cooking.
Our ceviche really speaks to the attention to detail that I learned from Thomas Keller—how to care for ingredients and use them at the peak of their season. We get beautiful kampachi and add fresh lime juice and orange juice, beautifully chopped chives, a brunoise of ginger and the little parsley leaves. We use tomatoes when they are in season. When I look at that dish, I can see my time at The French Laundry.
What is your favorite cookbook of all time? The first one that I ever picked up was Alfred Portale’s Gotham Bar and Grill Cookbook. I was probably 19 at the time and I didn’t even know some of the ingredients in that book even existed. It really opened me up to the culinary world—to the chefs, their restaurants, their creativity with presentation. Before, I was just putting food on a plate.
What is one cooking technique that everyone should know? Blanching vegetables. You have to bring a big pot of water to a raging boil, add enough salt so it’s salty like the sea, cut the vegetables in even pieces and have ice water ready so you can stop them from cooking.
What is your secret-weapon ingredient? Smoked pimentón or paprika is a big part of our flavor profile at Tavernita. It’s something I reach for a lot when I want that spicy, smoky flavor. At home you could make a mayonnaise with it and put it on a sandwich, or add it to oil and use that to dress a salad.
Name one indispensable store-bought ingredient. I can’t live without Sriracha. I put it on everything. I was putting it on pizza last night. It has a spicy, garlicky flavor that I love. When my friends are over, I’ll make them a grilled cheese sandwich with a fried egg, avocado and Sriracha. That’s our go-to snack.
What is your current food obsession? If I could eat pho every day of my life I would be a happy person. For me it’s just so comforting. I love the way they serve it in this gigantic bowl with broth and noodles. I love that you can add however much sambal oelek (chile sauce) as you want. I add so much that when I get down to the bottom of the bowl, it’s so spicy that it stresses me out a little bit. 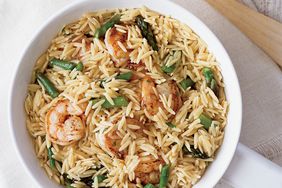