Food writer and self-professed “BBQ Pilgrim” Robb Walsh is a three-time James Beard Journalism Award winner. Author of over a dozen books on food, Robb has cultivated a devoted readership that follows him on his many enthusiastic culinary adventures, from his Texas barbecue deep dives to his world tour of oysters. Some of his bestselling titles include Legends of Texas Barbecue, The Chili Cookbook, and Are You Really Going to Eat That? His work has appeared in The Washington Post, Epicurious, Houstonia, Saveur, Fine Cooking, Thrillist, and others.

Once referred to as the “Indiana Jones of food writers,” Robb Walsh has seemingly done it all. Among his many roles, he has been: a commentator on National Public Radio's Weekend Edition, Sunday; restaurant critic at the Houston Press; food columnist for Natural History Magazine; editor-in-chief of Chile Pepper Magazine; and partner/co-founder of the now-shuttered El Real Tex-Mex Cafe in Houston. Robb is the founder and head judge of the three-decades-old Austin Chronicle Hot Sauce Festival. His writing has been anthologized in editions of Best Food Writing, from 2001 through 2009, as well as four volumes of Best Southern Food Writing. Robb co-founded the non–profit organization Foodways Texas headquartered at the University of Texas at Austin, on a mission to preserve and promote Texas food culture. He also co-founded the non-profit Galveston Eats in association with The Gulf Coast Food Project to preserve Galveston's food culture. When he is not in Galveston, Robb can be found on the shores of Galway Bay, Ireland, where he spends his time traveling around the country learning and writing about Irish foodways in his food blog Ireland Eats. 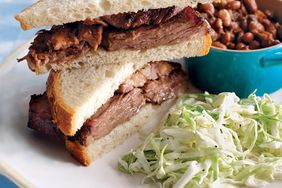