Patrick O’Connell is a self-taught chef who began his culinary career as a caterer. In 1978, along with his former business partner, he converted an old gas station into what has now become an internationally renowned culinary destination and inn. O’Connell initially crafted his menus based on ingredients sourced from local farmers and artisan producers out of necessity, but it became one of the hallmarks of his regional cuisine. The Inn at Little Washington has remained on the list of the world’s top restaurants since its opening, garnering three Michelin stars and two five-diamond awards. Among the many accolades O’Connell, himself, has received are multiple James Beard Awards, including a Lifetime Achievement Award in 2019, and an honorary doctorate from Johnson & Wales University. O’Connell has appeared on numerous programs, such as Good Morning America, the Today show, the CBS Early Show, the Martha Stewart Show, Top Chef, and the Charlie Rose Show. He is also a frequent guest speaker at The Smithsonian Institution and The Culinary Institute of America.

Patrick O’Connell graduated from the Catholic University of America with a drama degree. 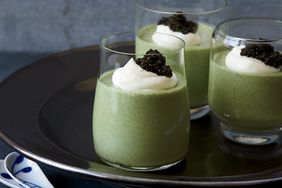 Flank Steak with Garlic and Ginger