Born and raised in Montreal, Noah's developed his love for food at an early age while helping his grandmother make chicken matzo ball soup. He found himself at the crossroads entering his last year of law school when he realized he was spending more time smoking meat on the rooftop than studying law. His passion for cooking won. With his then-girlfriend now-wife Rae, Noah invested his remaining tuition money into what would eventually become his seminal Jewish deli Mile End, named after his grandparent’s old Montreal neighborhood. In 2014, Noah joined forces with New Yorker Matt Kliegman to launch Black Seed Bagels, which Nation’s Restaurant News named a breakout fast-casual chain in 2020. Along with his many business ventures, he and Rae became partners in Otto’s Market, a grocery store/deli located in their Germantown community.

Noah Bernamoff is a graduate of McGill University. He studied law at Brooklyn Law School. 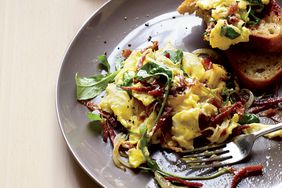