Iranian-born Naz Riahi is an award-winning film director and freelance journalist whose writing focuses on the intersection of food and design, technology, art, creativity, social justice, and trends. Her work has been featured in Bon Appetit, Refinery29, Catapult, Harpers Bazaar, Longreads, and others.

Naz Riahi is a woman whose creativity and entrepreneurial spirit are boundless. She honed her advertising and marketing chops as associate director of a creative boutique unit of the powerhouse media agency OMD, before establishing herself as a top-notch consultant and brand strategist whose clients have included Levi’s, Nordstrom, Pepsi, The CW, and Brooks Running. As a director of short narrative films, Naz has won praise from numerous publications and cultural institutions, including The New York Times, Brooklyn Academy of Music, and Fast Company. She received a Vimeo Best of the Year Award and a NoBudge Best of the Year Film award for her film Sincerely Eric. She worked with dozens of partners, such as MIT Media Lab, Food + Future, IDEO, and Target, over the course of four years to put on her Bitten food conference series, which was executed across three states and attended by thousands of people. Naz also collaborated with journalists like the late Jonathan Gold, chefs Nasim Alikhani and Kwame Onwuachi, as well as many artists, activists, founders, technologists, farmers, and students.

Naz attended Western Washington University, where she graduated with a bachelor of arts in journalism and Spanish. She received a master of fine arts in creative writing from The New School. 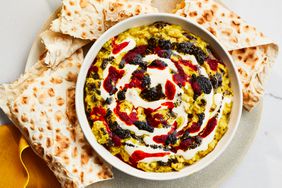 This Iranian Supermarket Gives Me a Taste of Home