Why Because he expertly weaves global nuances into the modern American dishes he creates with co-chef Dan Barber.
Born Cincinnati, OH, 1968.
Education École Supérieure de Cuisine Française, Paris.
Experience Jacques Cagna, Paris; March and Daniel, New York City.
How he describes his food New York-style American cuisine.
Current Obsession eGullet.com. "It's a Web site for food fanatics."
About his recipe Anthony says the pickled eggplant in the lettuce soup he developed with Dan Barber was inspired in part by his grandfather. "It was his favorite thing to eat. He ate a simpler version—he'd salt the eggplant and slap it between two slices of Italian bread."
Won Best New Chef at: Blue Hill, New York City 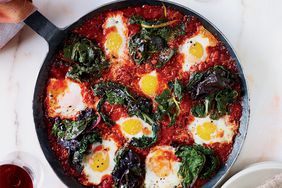 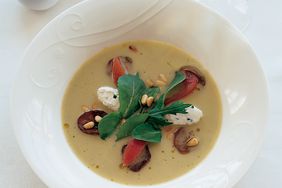