F&W Star Chef
» See All F&W Chef Superstars
Restaurants: Birch & Barley, Churchkey
Experience: Cru (New York, NY), Blue Hill at Stone Barns, Allen & Delancey (New York, NY)
Education: Culinary Institute of America, Hyde Park, NY
“I didn’t come from a food family,” says Washington, DC, chef Kyle Bailey. “We ate plain chicken breasts all the time and cold cereal for dinner. We never ate fish unless it was in stick form.” But that all changed for Bailey the first time he stepped foot inside a professional kitchen. When he was 14, he took a job washing dishes at the Brass Ladle Bistro not far from where he grew up in Aston, Pennsylvania. The back-of-house energy was seductive for Bailey, who began to understand the pleasure of food, and at 18 he took off for the Culinary Institute of America. Since then, Bailey has worked in Miami, the Bahamas and New York, where he cooked at Cru, Blue Hill at Stone Barns and Allen & Delancey. In 2009, Bailey and his pastry chef wife, Tiffany MacIsaac, moved to DC to open the beer-centric Logan Circle spots ChurchKey and Birch & Barley. His work at the restaurants earned him notice from Food & Wine, which listed him as a People’s Best New Chef nominee in 2011 (he took home the title for the Mid-Atlantic region).
As he raced to open the fried chicken and doughnut joint GBD (that’s “golden, brown, delicious” in kitchen-speak) and began work on another beer-soaked venture, Bluejacket (expected to open in spring 2013), Bailey sat down to talk shop with Food & Wine.
What recipe are you most famous for?Our chicken and waffles is pretty epic. We use a yeast-risen batter for the waffles, and the chicken is buttermilk brined. We top that with buttered pecans and a maple-chicken jus seasoned with Espelette pepper. People always come back for it.
What two dishes really tell us your story as a chef? Probably my duck dish with wild rice, turnips and Swiss chard. We age the ducks for a few weeks to tenderize the meat and dry out the skin so that it gets really crispy. On this plate it’s the roast breast and the confited leg, rendered to order and glazed with honey. But we get in whole ducks and use every part of the animal for different dishes. The bones and wings go to stock; the livers go to a mousse that we sell on our charcuterie board; the hearts are folded into pierogi filling; the gizzards are confited and made into a rillettes. It’s just a great challenge to use the whole animal.
We also get a lot of raves for my beet risotto. It’s another example of how we work to use every part of an ingredient. We roast the beets and make a puree that we use to season the entire bowl of risotto. It turns the rice this shiny, beautiful red color. We sauté the stems with raspberry wine vinegar, wilt the leaves and fold those in as well, along with Parmesan cheese. The whole thing is topped with whipped goat cheese. It was one of the first dishes we ever put on the menu, and it is extremely simple but very elegant and beautiful.
What is your favorite cookbook of all time?East of Paris, from David Bouley. It’s Alsatian food, so it’s very hearty. There’s a really great goulash recipe in there—it’s simple but it has just enough extra ingredients to really make it special.
What is your secret-weapon ingredient?Freshly grated Parmesan. It can change the texture and it makes the flavor of a dish so much more complex. It’s obviously great in pasta, but I also like it in vegetable purees and in thick soups. We get it in 50-pound wheels.
Name one indispensable store-bought ingredient.Fish sauce has an unmistakable flavor that lends a lot of complexity to dishes. Just a drop in a sauté or stir-fry, on raw fish or in a salad dressing is great.
What ingredient will people be talking about in five years?I think seaweed will finally break through from professional kitchens into everyday life. For Americans, it’s trash—just something that washes up on the beach. But if you look at all of Asia, everybody is already using seaweed. It has a really good umami flavor.
If you were going to take Anthony Bourdain out to eat, where would you bring him?I think it would be so funny to bring Anthony Bourdain into a Gordon Ramsey restaurant. I just bet he would have so much to say about the food and about what it means to truly be a chef. We’d order some food and I’d just stand back and watch the show. That would be hilarious!
If you were facing an emergency, and could take only one backpack filled with supplies, what would you bring?I have this iced-tea spoon, and I use it for everything. It’s perfect for tasting and stirring and cracking somebody on the head. Honestly, I carry it around with me. So I’d bring that and a Japanese petty knife. It’s super-sharp and good for everything. And, a wine key. You can do so much with a wine key. I’d bring sherry vinegar, black pepper and bacon.
What is your current food obsession? At home, I can’t stop eating popcorn. After a whole day working in the kitchen, when you’re building complex flavors and tasting super-rich sauces and gravies and bringing everything up with crazy acidity, you get home and just think, I could go for the popcorn. It’s a simple, easy flavor and I can eat a lot of it. 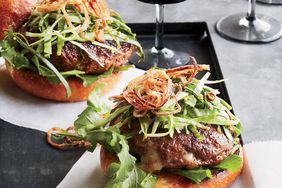