Celebrity chef and television host Ken Hom is arguably the world's most decorated and respected authority on Chinese cooking and Asian cuisine. He has authored nearly 40 books and contributed to just as many publications in a career spanning nearly five decades. Hom was appointed an honorary OBE and CBE by Queen Elizabeth II.

Ken Hom went to work in his uncle's restaurant kitchen at age 11. While giving Italian and Chinese cooking lessons from home to help pay for his college tuition, he realized his true calling and passion. Hom received a job offer to teach at the nascent California Culinary Academy in San Francisco. Upon publication of the widely acclaimed Chinese Technique in 1981, he landed the first of six popular cooking shows on the BBC that taught the country how to cook with a wok and greatly changed the perception of Chinese and Asian food in the United Kingdom. His 2012 BBC documentary series Exploring China: A Culinary Adventure with fellow chef Ching He Huang won the 2013 Food Broadcast of the Year Award. In addition to his cookbooks, Hom has written about food, travel, restaurants, health, and books for such publications as The New York Times Magazine, The Washington Post, Bon Appetit, Vogue Australia, Food Illustrated, The Sunday and Daily Times of London, Time Magazine, and Gourmet. He has consulted for companies around the globe, including Cathay Pacific Airlines, The Royal Viking, The Regent in London and Sydney, The Peninsula in Hong Kong, and Burj al-Arab in Dubai.

Hom is also involved with various charities and institutions such as Action Against Hunger, Prostate Cancer UK, and The Oxford Brookes University, where he received an honorary doctorate and to which he donated his library of over 3,000 cookery books for the benefit of catering students. He published his autobiography My Stir-Fried Life in 2016. 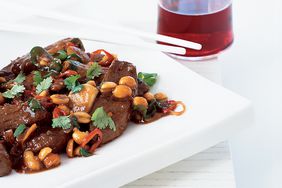