Won Best New Chef At Aubergine, Carmel, CA
Why He’s Amazing Because he combines ultra-seasonal ingredients with flavors from his world travels, creating a menu that changes nightly and that’s purely Northern California.
Born 1978; Erie, PA
Culinary School The Western Culinary Institute (Portland, OR)
Background Charlie Trotter’s (Chicago)
Quintessential Dish Abalone and oyster with pickled sea beans and wild sea lettuce on a braised pig’s tail cake
Previous Career In his early 20s, Cogley toured the world as a professional figure skater with Disney on Ice. “We had so much downtime when the show was being transferred to different cities—it could take as long as a month. We’d eat out wherever we could.”
On His Transition From Skater To Chef “It was very natural. I was so used to working long hours. Restaurants were a natural fit for me.”
Takeaway From Charlie Trotter’s Precision and spontaneity: Cogley’s dishes look like tiny scenes from nature—seemingly unscripted but composed.Story of Discovery
“Before he became a chef, Justin Cogley was a professional ice skater who toured the world and ate everywhere, keeping a record of the most interesting flavors. He clearly hasn’t forgotten them: The international influences on his $98, four-course prix fixe menu are astonishing. He garnishes a Monterey Bay abalone steak with slivers of the tart pickled Japanese fruit umeboshi, local sea grapes and imported fresh hijiki. I was knocked out by the boldness of just-cooked Japanese kanpachi (amberjack) with peeled dates and a vanilla-and-Sichuan-peppercorn broth. I would never have guessed that a skating career would be the key to such remarkable food.”—Kate Krader 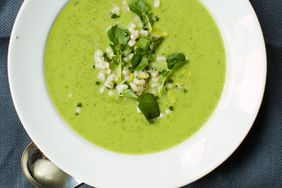