Restaurant: Ava Gene's , Roman Candle Baking Co. (Read a review)
Location: Portland, OR
Why He's Amazing: Because his rustic Roman pastas and meats are fantastic, but his simple vegetable iterations—like a salad of apples, walnuts, chile and lime—are mind-bogglingly good.
Culinary School: Le Cordon Bleu (Portland, OR)
background: Franny's (/sites/default/files/rooklyn); Lupa, Momofuku Ssäm Bar, Blue Hill (New York City)
Quintessential Dish: Beets, carrots, celeriac, pickled raisins and pistachio nut butter
Claim to Fame: The "infamous kale salad," as he calls it, which he "introduced" at Franny's in Brooklyn. The dish of raw Lacinato kale ribbons tossed with a garlic-and-lemon dressing and topped with bread crumbs and pecorino has been written about on countless blogs and in the New York Times.
Farm Living: During two years at Barbara Damrosch and Eliot Coleman's pioneering Four Season Farm in Harborside, Maine, McFadden worked his way up from apprentice to farm manager. While there, he curated weekly dinners that started with sunset cocktails in the greenhouse followed by a candle-lit meal in the produce stand.
His Impression of Italian Food in Rome: "I kind of think the cuisine is incredibly honest; there's no way to hide if the pasta isn't good. Perfect pasta is perfect. To use something that is so simple and make it so wow, to make that into something someone's never had before—it's a really fun experience." 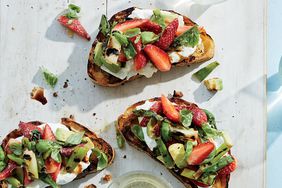