F&W Star Chef
» See All F&W Chef Superstars
Restaurants: Bäco Mercat, Bar Amá (Los Angeles)
Experience: Daniel, La Côte Basque (New York City); Manresa (Los Gatos, CA); Lazy Ox Canteen (Los Angeles)
Education: Culinary Institute of America
What’s your signature dish? Bäcos. I started making them as a late-night snack for employees about eight years ago, when I was at Restaurant Maison G in Hollywood. I would make sandwiches out of flatbread and fine-dining leftovers like braised pork belly. They became an off-menu item for regulars. First we called them global tacos, then for about two weeks we called them “globacos.” When I decided to trademark the name, I wanted something shorter that looked and sounded good. When I finally opened my restaurant, we became known for the toron bäco made with a patty of oxtail and house-ground beef topped with hash browns, horseradish yogurt, garlic aioli, onion sprouts, house-made pickles and cheddar cheese.
Favorite cookbook of all time? Fernand Point’s Ma Gastronomie—especially his notes on running your kitchen and on being a restaurateur and a cook.
What’s your current food obsession? Habanero peppers. At Bar Amá, we don’t try to make anything superspicy even though it’s Tex-Mex. But I’ve been playing with habanero in our Bus Driver Sauce. It’s an amazingly flavorful chile, so I’ve been trying to accentuate its fruitiness while tempering the heat. I’m going to start bottling it so I can’t tell you how I do it, but it’s delicious.
Name one secret-weapon ingredient.Indio oregano from Oaxaca, Mexico. At Bar Amá we get it from Rancho Gordo. It has a completely different flavor from traditional oregano. It’s hard to explain, but it’s more anise-y. It changes beans, it changes rice, it changes everything.
If you were going to take Thomas Keller, Tony Bourdain and/or Mario Batali out to eat, where would it be? I’d take all three to Newport Seafood. It’s a banquet-style Chinese restaurant in the San Gabriel Valley. We could eat like crazy. I’d want to spend more time eating than talking with that group, at least at first, because of the intimidation factor. Some beer could also help loosen up the conversation.
If you were facing an emergency, and could only take one backpack of supplies, what would you bring; what would you make? Quinoa, since that’s probably the easiest way to pack the most protein. The rest I’d find.
What’s your favorite food letter of the alphabet? C is for cabrito, or baby goat. I had cabrito when I was a kid, and I didn’t understand it. Now we’re serving it at the restaurant. We grill kid goats then slow-roast them in our deck oven. You’d think it would be gamey and tough, but it’s sweet and delicious.
What’s the best house cocktail, wine, beer? For a house cocktail, I love old-fashioneds. For house beer, I love hoppy, bitter beers, like Gubna from Oskar Blues, their imperial IPA. For house wine, Vinho Verde for white and a red Sancerre. They’re both crisp with nice acidity.
hat do you eat straight out of the fridge, standing up? I’m really into Kix for some reason. I bought a box as a last resort at a little market on the corner of my street, but then it triggered all these memories. So now I keep snacking on Kix with milk. 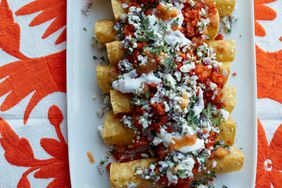