F&W Star Chef
" See All F&W Chef Superstars
Restaurants: 112 Eatery, Bar La Grassa, Burch (Minneapolis)
Experience: Café & Bar Lurcat, D'Amico Cucina, Lowry's (Minneapolis); Campiello (Eden Prairie, MN)
Who taught you to cook? What is the most important thing you learned from them? Many people, but two stand out:
1. Jim Reininger, who owned a restaurant called Lowry's in Minneapolis. I started working there when I was about 20. I didn't know anything about anything. I ended up working there for about five years. He taught me about what your work ethic needs to be to move up to fine dining. By the time I left I was a pretty good cook.
2. Jay Sparks was the chef at D'Amico Cucina in Minneapolis, where I worked next. I ended up staying with him for about 10 years. He taught me how to be honest with yourself, to admit if something's right or flawed, to change it or get rid of it altogether. Still today I'll ask myself, is it really that good? Would I order it again if I had it at another restaurant?
What was the first dish you ever cooked by yourself? Steak Diane. My mom was a server in restaurants in Minneapolis when I was a kid, back in the '70s. Back then, fine-dining restaurants served things like duck à l'orange and steak Diane. She would talk about them when she came home. When I was about 9 or 10 I decided to make it for my mom and dad one night. I thought it was pretty good! We didn't have a lot of steak in our house back then, but I made it a few times.
What is the best dish for a neophyte cook to try? How to roast a good chicken. Tom Colicchio has a whole section on how in his first book, Think Like A Chef. I do mine much like he does, by seasoning it with salt and pepper, then browning both sides of the leg and thigh on the stovetop until they're a nice, deep brown. Then I put the bird in a 350° or 375° oven, breast side up. Just baste it as you go until it's done. Toward the end you can throw in some butter and garlic cloves and some herbs like thyme or rosemary; baste it with that.
Is there a culinary skill or type of dish you wish you were better at?I wish I knew a little more about Southeast Asian food. I eat lunch at this Vietnamese place called Quang (quangrestaurant.com) in Minneapolis probably once a week and I don't know how to make any of that stuff.
What is the best-bang-for-the-buck ingredient? Dried pasta. When I was younger and I'd come home at night from cooking, if I had Parmesan and garlic and olive oil and some noodles, I was in heaven.
What is your favorite cookbook of all time? I love the River Café books and the Chez Panisse books, and Cooking by Hand, by Paul Bertolli. But when the first Charlie Trotter book came out, every chef in town bought it. I got mine early in my career, about 1994, when I was just starting to look at cooking as a creative outlet. I was broke, and I bought it and cherished it. I don't think I ever made anything in it. I just got inspired flipping through it.
Name your secret-weapon ingredient. All the guys who work for me tease me that I finish everything with lemon juice, chile flakes and olive oil.
If you could invent an imaginary restaurant project, what would it be? I would like a 25- or 30-seat restaurant where everyone comes in, has a cocktail, some hors d'oeuvres, sits down and eats three or four courses that I've decided to make. I ate at a couple of places in France that worked that way, where you ate what they gave you. It seems like it'd be a good way to force myself to be creative. But I can't figure out how I could do it without going broke—or charging a lot. And I've never been comfortable charging $125 a person, even $85 a person.
What's your signature dish? Pasta probably defines me the most. And my tagliatelle with foie gras meatballs is a pasta item at 112 Eatery that's never changed. I got the idea from reading the original A Voce review in the New York Times back when it first opened in 2006, which mentioned their duck meatballs with foie gras. I thought, Oh man, that sounds good. I ended up going there later, and discovered theirs were nothing like mine. Mine are almost all foie. 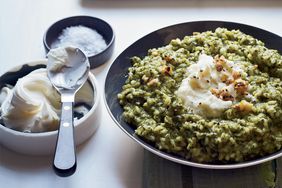