Frank Ostini is renowned as owner, chef, and winemaker for the legendary Hitching Post 2, in Buellton, California, operating since 1993, featuring "Santa Maria Style BBQ", a feast that features foods grilled over a red oak fire, and an honored ritual in the Santa Ynez Valley.

Experience: Frank Ostini grew up in and around the Casmalia Hitching Post, his family's steakhouse in central California, in operation since 1952. The regional spokesman for Santa Maria-style barbecue, Frank has expanded the family's original menu to cook most anything over the embers at his restaurant, including local vegetables, fish, poultry, pork, and game, in addition to the wide selection of the best quality beef in America, sourced from small packers in Nebraska, Iowa, and Kansas, and aged to his specifications.

Since 1984, Frank Ostini and partner Gray Hartley have produced Hitching Post Wines, specializing in Santa Barbara County Pinot Noir. The restaurant and wines became world-renowned after the runaway success of the film Sideways in 2004, in which it was featured. 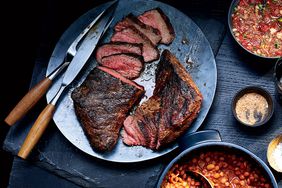