Won Best New Chef at: ABC Kitchen, New York City.
Born: 1973; New York City.
Experience: Union Square Cafe, Tabla and Core Club, New York City.
How he started cooking: “I began my restaurant career in the front of the house at Union Square Cafe and spent my days off in the kitchen learning about cooking. Once I got going, it was hard to leave.”
How he got the job at ABC: “I met ABC Kitchen co-owner Jean-Georges Vongerichten at the Union Square farmer’s market at the Berried Treasures stand. We were both shopping, and we started talking, and before I knew it, I was interviewing for the job.”
Memorable cooking experience: Preparing the food for his own wedding. “We prepped all the food a couple of days before, then I hired chefs from Tabla to cook at the wedding. [Restaurateur] Danny Meyer was there, Floyd [Cardoz, chef at North End Grill] was there, Mike Romano [chef at Union Square Cafe] was there—so many people I look up to. To have them eating my food was really exciting. I made roast suckling pig, steamed halibut, grilled quail. My mom baked the wedding cake. Floyd couldn’t stay out of the kitchen; he kept trying to help.”
Pet peeve: Young cooks who leave good jobs too quickly. “I cooked for Floyd at Tabla for seven years. I learned something even on my last day.”
Favorite childhood dish: Stollen, the rich German bread filled with dried fruit. “At Christmas, my mom made tons of stollen. She also made lemon curd. It was the oddest pairing, but since I liked them both so much, I’d always stuff my face. I can remember opening my gifts with a big plate of stollen in front of me.”
Cheap eat: Roast pork buns in Chinatown. “I’ll get them pretty much anyplace.”
Guilty pleasure: M&M’s. “Plain or pretzel.”
Ingredient obsession: “I am definitely obsessed with Sun Gold cherry tomatoes when they’re in season. I use them everywhere: raw in salads, lightly cooked in pastas and just barely warmed in broths and sauces.”
Favorite kitchen tool: Microplane. “I use it to grate cheese, citrus, ginger, nuts, chocolate.”
Memorable meal: First meal at New York City’s Per Se. “It was my wife, Hannah’s, birthday. I still remember the way everybody—from the back waiter to the host—looked her in her eyes and said ‘Happy Birthday!’”
Favorite wine: Black Chicken Zinfandel from Napa’s Robert Biale. “Anyone who knows me well buys a bottle for me as a Christmas gift.”
After-hours hangout: 8th Street Winecellar. “They make the best pork sandwich I’ve ever had, with shredded meat and spicy pickled jalapeño mayo.”
Fantasy restaurant: “I’d like to do something with conveyor belts, like you see at sushi restaurants, but with a lot of the farm ingredients I use now. It would take a lot of errors out of service.”
What he’d be if he weren’t a chef: A furniture maker. “I’m a hands-on guy. I’ve built four or five pieces of furniture in my life.”
Favorite cookbook: Think Like a Chef by Tom Colicchio.
Twitter heros: “Chef Sean Brock—I find that he’s always saying something interesting. I follow some fashion people too, either to learn something or to stay up on them so when I see them at the restaurant I know what’s going on. I absolutely adore Rachel Roy and Lela Rose. If I see on Twitter that Lela had a show, I can send her a note saying congratulations.”
Favorite app: Chefs Feed, which compiles restaurant recommendations from chefs. “When I was in Chicago recently, it was very helpful.”
Best food gift: A chitarra, a frame strung with music wire to cut fresh pasta by hand. “Usually, I don’t feel like my parents really apply themselves when it comes to presents. They’ll say, ‘What does he want? Some new underwear? A new shirt? Great.’ But one year a box showed up on my birthday, and it was a chitarra. The New York Times had done a piece on it and my dad thought it would be a cool gift for me. It was mind-blowing.” 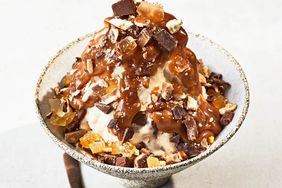 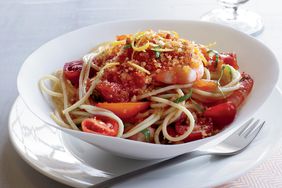 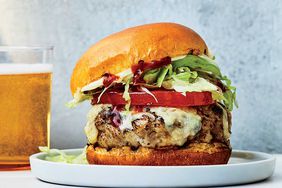 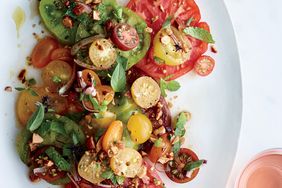 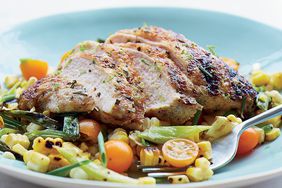