Charlie Palmer is an American chef, hospitality entrepreneur, hotelier, and author. He has built hotels and restaurants throughout the United States.

Having worked in his family's vegetable garden as a child in Upstate New York, Charlie Palmer became an early advocate for farm food over factory food. He founded the sublime three-Michelin-starred Aureole restaurant on Manhattan's Upper East Side in 1988, where he committed to creating dishes featuring regional American ingredients. Twenty years later, Aureole relocated to the Bank of America Tower at One Bryant Park near Times Square, where it flourished for 12 years before transitioning to a virtual model, Aureole at Home, in June 2020. In its 30 years as a brick-and-mortar restaurant, Aureole earned 13 Michelin stars and two James Beard Awards. 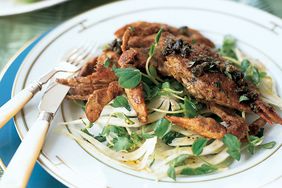