Binh Duong is an acclaimed chef and cookbook author. His restaurants Truc Orient Express in Hartford and La Truc in Boca Raton were celebrated destinations for innovative South Vietnamese cuisine that showcased local ingredients. He was nominated for a James Beard Award in 1992.

Binh Duong has been cooking Vietnamese food since the age of six, learning from his mother and aunt over the objections of his father. After a brief time studying classical techniques at the Culinary Institute of America, he dove head first into cooking professionally at his sister's Hartford restaurant Truc Orient Express, which he eventually took over. There he set about creating dishes that celebrated the delicate, clean balance of aromatic, spicy, tart, and sweet flavors characteristic of South Vietnamese cooking using local ingredients like lobster, sea scallops, and flounder. He returned to Vietnam with Food & Wine editor Marcia Kiesel to research the cooking in homes, restaurants, and street markets for their cookbook. Published in 1991, Simple Art of Vietnamese Cooking is still considered an important culinary tome, named one of the "43 Best Vietnamese Cooking Books of All Time" by Jack Phan and Nigella Lawson in 2022. 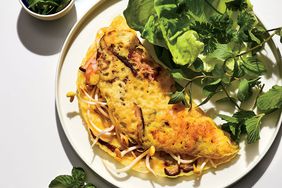