Absolut Releases Handbag That Looks Exactly Like an Espresso Martini

The cocktail-shaped accessory is a collaboration with "Pasta Bag" designer Nikolas Bentel.

We're just halfway into November, but it feels like we’re already up to our necks in the holiday season, with meals to prep, parties to plan, and, uh, leftovers to rearrange and reheat. Absolut Vodka seems to know that we could use something to boost our already exhausted spirits, and it has designated the Absolut Espresso Martini as the cocktail of the season.

The Swedish-born spirit brand has partnered with the inexhaustible entertainment experts at Hauste to launch the Absolut Espresso Martini Mini Soiree Hosting Guide ($26), which sends a step-by-step guide to hosting the perfect holiday gathering to your phone or tablet. The Guide — which promises "a little glam, lots of espresso, and endless cheer and joy" — includes a multi-course Swedish-inspired menu; an ingredient-by-ingredient shopping list; a planning timeline and checklist; customizable evites, printable menus and placecards; and even a Spotify playlist to set the right vibe.

And before you ask yourself "But what will I wear?" Absolut has you (partially) covered on that front, too. They've partnered with designer Nikolas Bentel on an Absolut Espresso Martini Handbag that, well, looks exactly like a filled-to-the-brim cocktail complete with espresso bean garnish — just pop the frothy top off and stash your belongings inside. The ultra-limited edition bag ($199) will be available for purchase on Black Friday, November 25, on the Absolut x Hauste website, hauste.co/absoluteminisoiree, while supplies last.

How to Make an Espresso Martini

"The goal of The Absolut Espresso Martini Handbag is to bring the iconic cocktail beyond the bar, onto the streets and into people's homes," Bentel said in a statement. "Attention-grabbing, yet classic, there is a real story to tell with this creative contrast: just like the timeless recipe, The Absolut Espresso Martini Handbag is the perfect mix of bold complexity and classic nostalgia."

If Bentel's name sounds familiar, that’s because he's the guy who designed the handbag that looked like a box of Barilla pasta a couple of summers ago. That purse — which went beyond viral online — was inspired by "the 100th bowl of penne pasta" that he said he ate in the early days of the pandemic. "The bag is an irreverent take on the past year of staying inside," he said at the time. "The goal of the bag is to inspire a little bit of thought and reflection on being able to create something exciting from the mundane."

Bentel followed that release with a second pasta bag, which was loosely based on Di Cecco's packaging. Both pasta bags were limited to 100 pieces each, and they both sold out faster than you could cook and eat a bowl of spaghetti. So if you'd like to have the kind of bag that will distract your holiday guests from the stack of dishes you couldn't get to before they arrived, you'd better act fast next Friday. 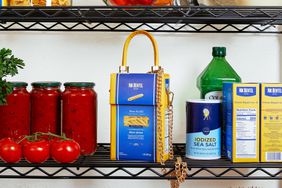 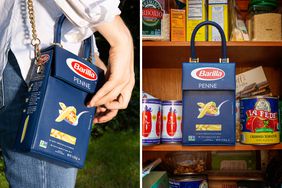